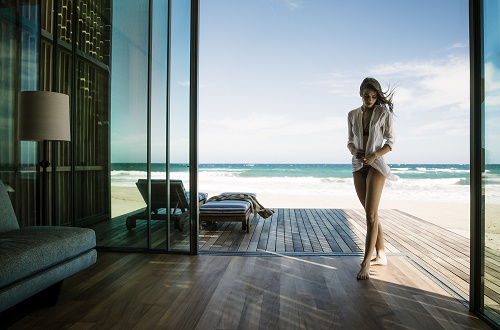 With a 2018 opening forecast, ‘Four Seasons Resort Los Cabos at Costa Palmas’ will be the centerpiece of the 1,000-acre Costa Palmas resort community.

Its central components are a Robert Trent Jones II-designed 18-hole golf course, a 250-slip deep-water marina, a beach, and yacht club, and a low-density, 145-key resort spread across multiple buildings.

The setting is a two-mile (3.2 kilometers) stretch of white-sand beach backed by the Sierra de la Laguna Mountains and fronting the warm, swimmable waters of the Sea of Cortez.

“Los Cabos has long been a favorite destination for luxury travelers and is a natural fit for Four Seasons as we extend our presence in Mexico,” said J. Allen Smith, President and CEO, Four Seasons Hotels and Resorts. “We look forward to inviting our guests from around the world to experience Four Seasons legendary quality and service as they discover the richness and beauty of Baja’s East Cape. Irongate has a tremendous vision for the Costa Palmas community and we are excited to work in partnership to create the region’s premier luxury destination.”

Ruben Reachi, Director General and CEO of the Los Cabos Tourism Board, noted that the new Four Seasons Resort and its spectacular golf course are “further confirmation that Los Cabos is the most important golf destination in Latin America.”

“Our canvas is a gently rolling expanse of sand that rises to nearly 40 meters,” Charlton said. “The sand is good, so we’re digging features into the existing topography and using the sand both as a seedbed and a framing element. We’ll have formal bunkers as well as blow-out sand features. It’s a beautiful dunescape – we’re accentuating it with golf holes that will offer dramatic ocean and estuary views.”

Vegetation, Charlton stated, consists mainly of ironwood (mesquite) on the upper reaches of the layout, with low-lying desert scrub nearer the sea. There’s also a mangrove preserve in the northwest corner of the course. Native grasses will be used to accentuate the design.

“We’ll have an excellent variety of good short par 4’s and long strong par 5’s,” Charlton explained. “We’re building a fun, playable course with several double-wide fairways, open-entry greens and lateral hazards.” Among the feature holes, he said, will be No. 3, a classic short par 3 tucked in sand dunes near the sea. Costa Palmas will be a core golf course, with a hotel and residential buildings spaced around its perimeter.

The East Cape’s location on the warm, crystal-clear waters of the Sea of Cortez makes for excellent snorkeling and diving, superb light-tackle sports fishing, and world-class windsurfing and kiteboarding. The idyllic setting at the base of the Sierra de la Laguna Mountains also offers multiple opportunities for land adventures, from hiking, biking and horseback riding to exploring waterfalls, spring-fed freshwater pools, and hot springs. With fresh water coming off the mountains throughout the year, the East Cape also provides ideal conditions for organic farming. Eighteen acres at the development will be dedicated to orchards and farms.

Situated at the tip of the 1,000-mile long Baja Peninsula, Los Cabos is home to award-winning hotels, resorts, championship golf courses, rejuvenating spas and world-class sports fishing. With a unique landscape of dramatic desert and dazzling beaches, Los Cabos is an exotic escape within easy reach of most U.S. and Canadian cities. For more information, images and videos from Los Cabos, visit www.visitloscabos.travel